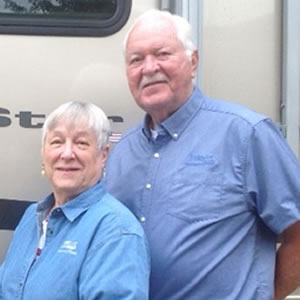 We live in South Bend, IN, we have been married 53 years, and we have two sons and six grandkids. We are both retired, and we do a lot of club rally camping during our summers. We stay home in the winter months and shovel snow and complain about the icy roads. Phyllis is a retired math teacher, and Steve is a retired customer service engineer.

We began our camping experience, like many of you, on the hard ground in a cold tent. We progressed to the bed of a ’73 Ford pick-up with an aluminum cap and a couple of built-in cots (a lot of noise when it rained), then to an 8-foot truck camper, and then to a 20-something foot fifth wheel. There were many years of inactivity while our two sons went through their high school and college years.

Our introduction to motor homing was with a 1977 GMC Class A, 26-footer, in 2011. We still have “Tinker Toy” and camp with a GMC owners’ club. We found and bought our Newmar, a 2002 Dutch Star 3852 named “Chocolate Charlie,” in 2017 and joined the Newmar Kountry Klub at the Nappanee office very shortly thereafter. The first rally we attended, we hosted at the Elkhart Campground. The second rally we attended, we were elected Hoosier Kountry Klub Presidents. Now we have been asked to fill the position of Indiana State Directors.
We want to thank the Region Six Directors and our International Directors for having confidence in us to fill this position.