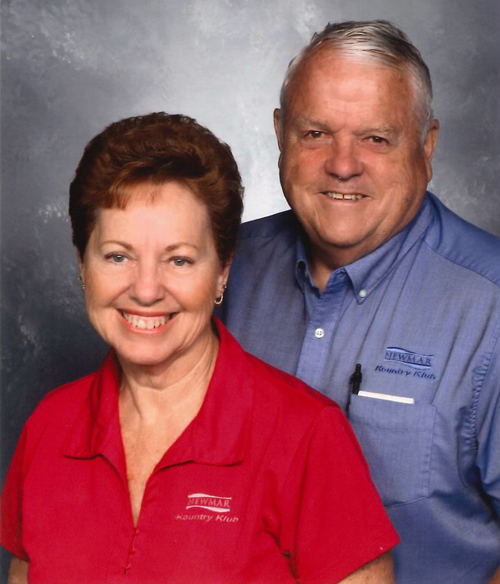 For new readers, we want to share a little about our background. We began our adventure when we bought our first Newmar in 2004 but had limited time to travel as we both still held full-time jobs. In 2006 we attended a winter luncheon while vacationing in Florida with the two chapters from Ohio and knew immediately that we wanted to join the fun-loving group. It did not take long for Ron to become a chapter Vice President and then President. In 2011 we were appointed Region Six Directors and held that position for five years. In 2015 we were elected Members-at-Large and traveled all over the United States and Canada for the next three years. You also might have met us as hosts of the Rally in the Keys, as workers for the past 10 years at the International Rally, at the Tampa Super Show, or at the Newmar Owners and Friends Luncheon we host in southwest Florida.

Now our new adventure continues, directing the activities and events that make the Newmar Kountry Klub the foremost social travel club in the nation…at least we think so! And what a year 2020 has been! Plans were underway for our 35th International Rally in Rock Springs, WY, but alas the pandemic took its toll, and we and Newmar Corporation canceled early enough for our members to rework their travel plans. In addition, most, if not all Region Rallies, State/Provincial Rallies, Chapter Rallies, and Special Events were brought to a screeching halt! Not only did we experience frustration and disappointment but even some depression! However, stay-at-home directives are somewhat a relief for RV travelers as we, for the most part, can change our location.

So, we proceeded to plan for 2021. The 35th International Rally will be held in Lewisburg, WV in July barring a continuation of the pandemic or any other national or international emergency. The 36th International Rally in 2022 will find us gathering in Rock Springs, WY. All announcements and updates will be in the Konnection, Happenings and on the website.

Our Special Event hosts who had to cancel their well-planned excursions worked diligently to reschedule for 2021. Except for the Calgary Stampede/Canadian Rockies event, most events are returning, along with a few new opportunities. We certainly appreciate the dedication of these ‘volunteers’ and the hard work they put into their events.

Our Region and State/Provincial Directors have also had to reschedule and revisit their plans. Although they were not on the road as much this year, their efforts to reach out to potential new members and keeping in touch with members is never ending.

For information and updates, be sure to read the Konnection magazine and the Happenings newsletter that is emailed as needed.

Our goal is to continue making new friends wherever we go. As always, we remain available if you, the core of our Klub have questions or suggestions. We can be reached thru the Klub office by email kountryklub@newmarcorp.com or phone 877-639-5582.