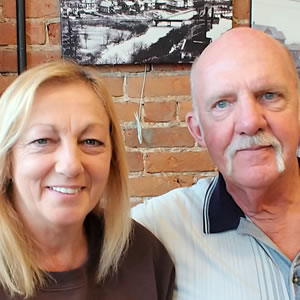 In 1986, I got my start in financial planning. It was here, in 1988, that I met who is now my wife and whom I married in 1991. Together we built our practice, which ended up with our primary office in Pennsylvania and a secondary office in Florida. Sue managed the staff as well as advised clients on life insurance, disability insurance and long-term care insurance. I was a registered investment advisor holding three securities licenses, advising clients on their investments.

In 1998, we bought a pop-up camper, enjoyed that for one summer, and sold it and bought a travel trailer on a lot in New York that lasted two years. Our business grew, and we bought a Class C so we could travel to clients who were moving to other states. One year later, we bought a 34-foot because the “C” was too small. More clients moved, they would introduce us to other clients in their new town, and the 34-foot was too small; so we bought a 43-foot. Business continued to grow, and the motorhome was a business vehicle, so we bought a 45-foot. Then I had my 3rd back surgery and had a hard time driving, and we thought our motor homing days were over.

Then a couple by the name of Roger and Peggy Weeks said you need a Newmar with smart wheel comfort drive. You won’t have any more trouble driving. I said these people are drinking the Kool-Aid.

Then while at a dealer for repairs, there was a new Newmar. I said to the salesman, “I want to take that for a ride.” The rest is history! We have now been drinking the Kool-Aid for the last seven years and are on our second Newmar product!
At the end of our career, we were blessed to have over 750 clients and a staff of five which Sue trained and oversaw. We ended up selling our Florida practice to our partner there and our Pennsylvania practice to our partner at that office.

Now retired for the last 4 years, we spend the winters in Fort Myers, FL and the summers in Pennsylvania.

Two years ago we got swindled by Bob and Jane Hadley, Region Seven Directors, into starting a chapter in Pennsylvania, and last year they roped us into being the Pennsylvania State Directors.

In September of this year, we accepted the challenge from Bob and Jane Hadley and started our second Chapter in Central and Western Pennsylvania called West Penn Travelers with 13 members. What an exciting time this has been!

We absolutely love every aspect of Newmar and the Kountry Klub!