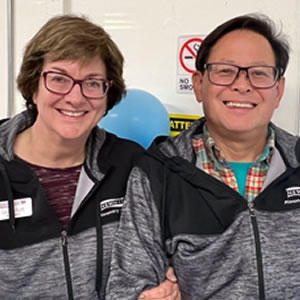 Hello! We are Laurie Hunt and Duane Paige, NKK Arizona State Directors from sunny, Sun City West, Arizona. We have been in this role since the end of October 2021, succeeding the very, very capable Ted and RuthAnn Hindes. We purchased our first Newmar in 2015 and have been part of the Newmar Kountry Klub since then. We joined the Arizona chapter, the Sun Catchers, as soon as we could and have been rallying along with Newmar ever since! We are past presidents and secretaries of the Sun Catchers and very much look forward to stepping into and further contributing to the Kountry Klub in this new role.

Laurie and Duane are retreads from the automobile industry in Detroit, Michigan. Laurie was born and grew-up on the northeast side of Detroit and Duane is a military brat, having lived in Japan and Germany, as well as many bases and posts around the United States. Both were educated as engineers and retired from General Motors Corporation. After his auto career, Duane returned to school to begin a new career as a critical care nurse and retired again in 2019 from hospital administration.

Duane’s earliest camping memories were as a child camping in a big military canvas tent on the Maginot Line in France (it rained the whole trip) and then pop-up trailer camping in Michigan (mosquitoes!). Laurie’s earliest memories included being a passenger in a pickup truck towing a trailer that was in a rollover accident on I-75 headed to Disney World. Let’s just say camping was never a sweet spot for either of us.

In Michigan, many people spend a good portion of their weekends on the highway traveling to and from their vacation homes “up North”. Fast forward to our move to Arizona and Laurie’s preference for travel to a variety of destinations. To that end, we purchased a little Itasca Class A gas coach, joined the Winnebago Club, and loved the people we met along the way. While we only kept the Itasca for about five minutes (not recommended!), we found that the Newmar and the “Newmar Difference” better fit our needs and as Laurie likes to say, we now have a beautiful “up North” home that travels “North, South, East and West”!

We also love our Newmar friends, and we really enjoy being part of this extended family. We travel with three small furry kiddos – two Cavalier King Charles Spaniels and a Cavapoo –and usually at least one or many more of our Newmar friends. We very much look forward to our future adventures to rallies across this big, beautiful country of ours.

Laurie enjoys watching football (Go AZ Cardinals!), artist pursuits in mixed media (knitting, paper crafting, encaustics – painting with melted wax) and planning fun social events. Duane enjoys learning about technological advancements, history, and planning and cooking delicious meals for family and friends, especially while in the Newmar and at rallies. We both enjoy working closely with our various chapter and regional friends in the Kountry Klub and look forward to seeing and meeting you at future rallies or an upcoming International Rally! 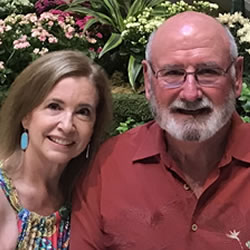