The Evergreen Aires held the “Heavenly Entrance to the Gates of Hell” rally at Hells Canyon RV Resort in Clarkston, Washington from June 10th to the 14th. Hells Canyon is formed by the Snake River that runs through Idaho and Washington and forms the border between Idaho and Oregon, it’s one of the deepest canyons in the United States. 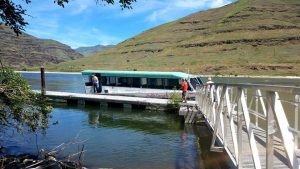 The highlight of the rally was the jet boat tour up the Snake River. We experienced the beauty of the canyon while viewing ospreys, eagles, big horn sheep, deer, and ancient Indian pictographs carved into the rocks. We may even have spotted the elusive ‘Land Shark’ along the banks of the river. Our ship’s captain kept us safe and dry though rapids and avoided hardy rafters coming down the river. We enjoyed lunch along the river and the spring wildflowers along the paths. The captain joked with us that he took us to “Hell and back” in one day.

The annual meeting of the Evergreen Aires was also held during the rally. Elections for new officers were held and we thanked our out-going Chapter President, Ken and Karen Fletcher and our Secretary Ben and Donna Barker for their volunteer service. Newly elected to the office of President were Mike and Linda Waller. The office of Secretary was combined with the Treasurer position which is held by Burl and Maureen Todd.

We offer our hardy congratulations to the new chapter officers. This chapter is really growing, so they will have their work cut out for them. Possible locations for next year’s rally were discussed as well as the option of holding SPURS at various locations in 2020.

Happy camping to all,