The April 2022 rally in Stonewall, Texas was attended by fifteen coaches and held in the beautiful hill country of Texas during the peak of bluebonnet, strawberry and wild flower season. As an icebreaker, upon arrival on day one attendees visited five coaches/couples and drew a card to form a poker hand. Barbara Wellhausen drew the best poker hand, four Jack’s. Bobbie Perkins was a close second with a full house.

After our Italian meal, a friendly competition for the Lone Star South Cup was played. Games included Pick 3, Flip Cup and TP Bowling, where the hosts were successful in getting an entire room of people to willingly toss rolls of toilet paper across the room! Bragging rights as the Lone Star Cup Champ goes to Randall Haydon.

Saturday after our busy weekend of exploring we enjoyed a Mexican dinner and pressed our luck with Bingo.

The weekend was filled with fun day excursions including tours of Wildseed Farm, LBJ State Park & Historic Site, bluegrass festival at Luckenbach, Garrison Bros. Distillery, Altstadt Brewery Castle and Tractor Museum, along with hill country winery tastings and boutique shopping in the area. The rocking chairs on the front porch of the rally hall were put to good use with great company and conversation. 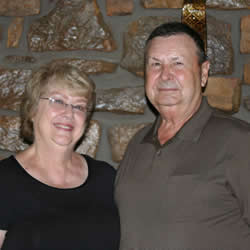