The annual West Virginia State Rally was held on July 26-29. We were privileged to have 15 coaches with 29 participants, a new record for a West Virginia rally. As a result of being held immediately after the 2021 International Rally in Lewisburg, West Virginia; we had participants from 8 states including the International Directors, Ron & Wanda Llewellyn; the Members-at-Large, Evan & Debbie Hughes; and the Region Six Directors, Chuck and Michelle Steenwyk. It was a fantastic rally and the participants seemed to enjoy the variety of activities. Entertainment was provided by Patrick Books, a local musician, sharing his classical and country rock selections on both guitar and banjo. He threw in some comedy to make the night complete.

If you have ever attended our rallies, you would know that Beth loves games to get everyone involved. Usually they require red Solo cups and squirt guns. This year she filled the Solo cups with prizes and had “Punch Cups.” Everyone got to “punch” through tissue paper to reveal a prize. The best game this year was the Prize Ball. Dozens of small prizes were encased in Saran Wrap and shaped into a ball. You only had until another person rolled doubles with a pair of dice to unwrap your prizes. It was a lot harder than it sounds and more fun than anyone thought it would be. It was a definite icebreaker game with everyone, including the speakers, taking a turn at their luck. 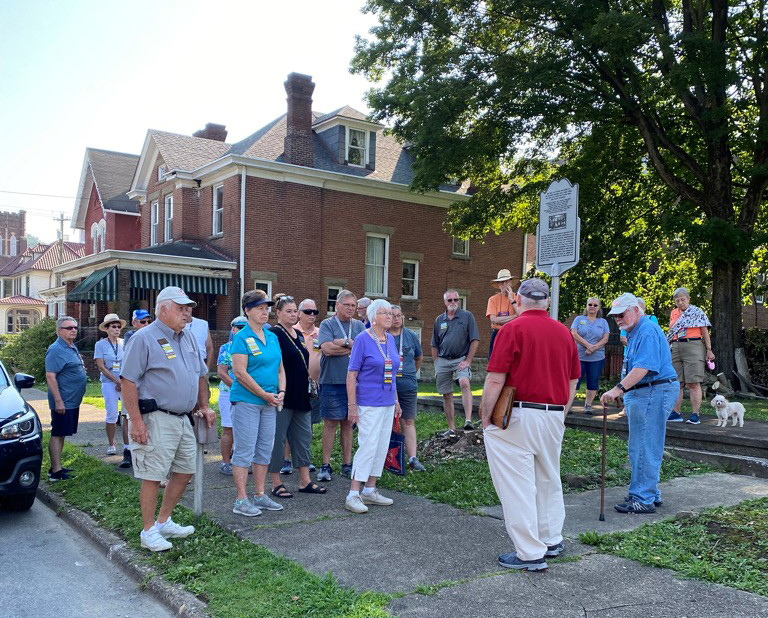 A local historian, Bruce Adler, led a walking tour of some interesting historical buildings in Weston. Among those were the West Virginia Museum of American Glass; and the Citizens Bank of Weston, which is the tallest one story bank building in the United States. A tour of the historic Masonic Temple completed the morning activities with barbecue lunch provided by the local 4-H Club. We toured the Military Museum, located in an old school; then off to the glass blowing demonstration, and of course some gift shopping.

On the free day, many went to the Trans-Allegheny Lunatic Asylum, the largest hand-cut stone building in the western hemisphere, with twenty-four acres of floor space. Some went to Lambert’s for pizza and were entertained by a local DJ.

One of the highlights of the rally was the great meals provided by the West Virginia State 4-H Camp at Jackson’s Mill held at the Mount Vernon Dining Hall. We toured the historical section of the mill. Everyone watched the mill in action, showing how grain was ground nearly 200 years ago. All were delighted to receive corn meal that had been ground that day on the old mill.

As this is written, our Chapter President and Vice-President, Mary & John Knight, are holding a chapter rally in Morgantown September 1-4. It will be an exciting rally with tours of the Avian Conservation Center, the West Virginia Botanic Garden, and a visit to the Morgantown Glass Museum. They also plan visits to the Mountain Peoples Coop, the Star City Farmers Market, and the Art Museum. It should be a fun activity packed rally.

Two weeks after that rally, Beth & Bill are leaving for a two month trip from the headwaters of the Mississippi River at Bemidji, Wisconsin to New Orleans followed by six days in Branson for the Christmas Shows.

We hope to see many of you at the Tampa RV Show in January. We already have our reservations in hand.

We can be reached by email: janelewbill@gamil.com.