Our October Rally was held at Gallia County Jr. Fair Campgrounds. We attended the Flea Market, and the Bob Evans Festival. I think everyone in attendance had a wonderful time. On Thursday, early bird night there were four units there and we decided to go out for dinner. Our Host Bob Kayden had been working with Amy Evans for places to eat, things to do, and our campground.

We picked the number one restaurant on Amy’s list for dinner, The Landing in Bladen. We were sitting at the table looking over the menu when I saw they served Steve Evans sausage. Bob had told me that Amy’s uncle Steve made the original Bob Evans sausage and sold it in local establishments. We were talking about the Steve Evans sausage and a gentleman sitting at the table behind ours popped up and started asking questions about where we were from. Finally, his wife said this is Steve Evans. We were all surprised and started talking with them. They were a lot of fun. He asked if we were Ohio State fans and we all said yes. Then he said this guy here is Jerry Lucas. Jerry Lucas is a basketball Hall of Famer. He played for the championship Middletown High School team then went on to Ohio State again winning championships, plus was a basketball Olympian in 1960, and then played for 3 National League teams. They were all so friendly and talking with us we asked for a picture of them with our group. See picture with article. Back row left to right. Steve Evans, Chris (restaurant owner), Jerry Rose, Jerry Lucas, Bob Kayden, Ron Llewellen. Front row Phyllis Rose, Jane Cozad, Becky Evans, Becky Kayden, Wanda Llewellen. The restaurant owner got involved with us also and brought us out a couple pieces of a yummy chocolate silk cake to share in the house. 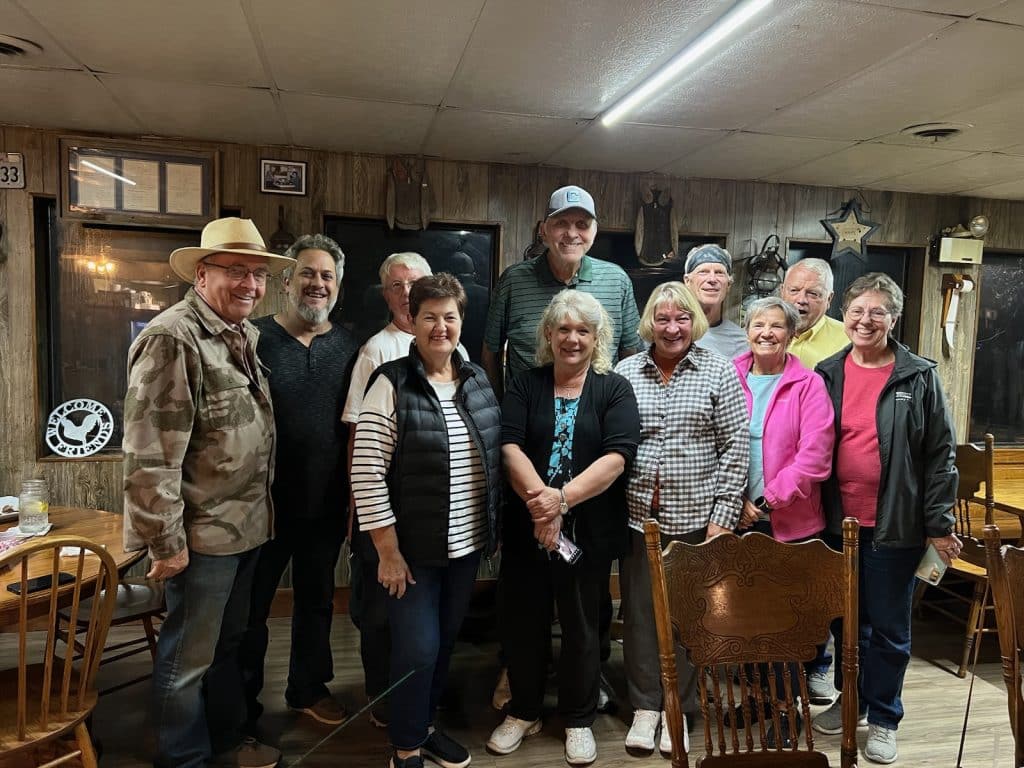 Those who wanted to, visited the festival. We left at different times and in separate vehicles but seemed to connect at lunch time where we had our picture taken in front of the American Flag painted side of the barn you can see from the road.
At our chapter meeting our new officers were elected. President: Todd Knieriemen, Vice President: Becky Laird, Secretary: Jane Cozad, Treasurer: Phyllis Rose.

When our chapter was formed, we decided to hold our rallies on the 4th full weekend of the month. This way we did not interfere with those who wanted to also attend the Buckeye Rallies on the second full weekend of the month. Having a specific weekend allows people to note their calendars for the chapter rallies ahead of time. This weekend can be changed in the event that you are wanting to hold it in conjunction with a festival or special event that occurs on another weekend.

We have rallies planned for next year. May is Memorial Day weekend at Shipshewana, Indiana, and a tentative rally is in planning stages for August at Camp Perry. If you would have an idea of a place or would like to host June or July, please contact Todd our new President.