We had a really good camping season for 2022. Several rallies and a lot of opportunities to see and hang out with friends, both Newmar and other groups. Now the season is over and lots of coaches are put to bed till Spring rolls around.

President Shirley Blair put together a mid-October rally, which is pretty risky with weather in Indiana. It was to be a “no host” rally, so no work for anybody, just hang out together and enjoy the camping experience. We did have quite a bit of wind and ultimately some rain that we blamed on the tailings of Hurricane Ian (rightly or wrongly), so no campfires or evening get-togethers. Unfortunately, both Shirley and Lynn had positive covid tests a few days before the rally, so they did not attend. Shirley did a mask-up and came to the campground for a brief business meeting on Tuesday. The “no host” thing kinda worked, but Phyllis organized a potluck dinner one night and she made a pancake breakfast one morning. 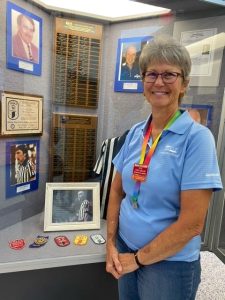 The rally was in New Castle, Indiana, which happens to be the home of the Indiana Basketball Hall of Fame. We did a tour of the HoF and got to see the recognition of one of our own members. Terry Miller is recognized in the HoF for her service as an official in State Championship games for Girls Basketball. You may remember seeing Terry on the basketball floor – she was the referee with the upside-down official’s patch on her shirtsleeve.

And, in the Good News column, we gave HKK membership applications to two couples who live in the New Castle area. And, we found there are some pretty great restaurants in New Castle.

We are hoping for a great year in 2023 and we are definitely looking forward to the Tri-State Rally which will be held at the Shipshewana South Campground May 25-29. The participating clubs are the Michigan Great Lakers, the Michigan Aire Kampers, the Ohio Buckeye Travelers, the Ohio Lake Erie Drifters and the Indiana Hoosier Kountry Klub.

So, these two old cowboys had been lost in the desert for days and they were nearly dead from starvation. Slim poked Tex and in a dry, parched voice said “Tex, look over there, it’s a bacon tree, we’re saved!”. Tex said, “By golly darn, it is a bacon tree!” Mustering all the strength they had they crawled over to the tree. Just as they arrived, they were shot with a hail of bullets and arrows. After all, that was no bacon tree, it was a HAM BUSH!

And, as another History Lesson for today – Did you know Captain Hook bought his hook at a Second-Hand store?

Hope to see some of you in Tampa in January! We look forward to seeing you all soon and frequently. Travel safely and stay safe. We can be contacted by email: sthornbg@aol.com or pdthornbg@aol.com, or telephone 574-329-9188.