Well … we did it! We pulled off our first rally as a new NKK chapter. This article is being written as we return home from our four-day stay at Friendship Village Campground in Bedford, Pennsylvania. This is an absolutely gorgeous and well-equipped campground with two stores, two pools, multiple activity areas for all ages, and the best ice cream around.

Twelve coaches were welcomed to the South-Central Pennsylvania mountains with the sounds of millions of 17-year cicadas and the “whoosh” of wipers clearing the way through unusually intense rainfall. Fortunately, the noisy insects were just an annoyance and the rain helped to wash the “splattered cicadas” from our windshields.

During our four days we examined the railroading history of the area with visits to the Altoona Railroaders Memorial Museum and the World-Famous Horseshoe Curve National Historic Landmark. On Saturday we headed to the nearby historic displays of Old Bedford Village … including being present for a Civil War re-enactment. Hundreds of Union and Confederate re-enactors with authentic long guns, dozens of firing cannons, and commentary by a retired Army General/historian gave our Klub members a taste (and smell) of conflict and life 160-years ago.

Thursday and Friday evenings were rainy enough that we had to gather under the protective cover of an open-air pavilion and a propane campfire. We were able to introduce many of our attendees to campfire “Mountain Pies” when we had small breaks in the rain and hot coals in the fire ring. A wonderfully hearty and warm beef stew … prepared by Tom & Sallie Watson … turned a rather cool, damp, evening into the perfect setting for sitting around, talking, and laughing. 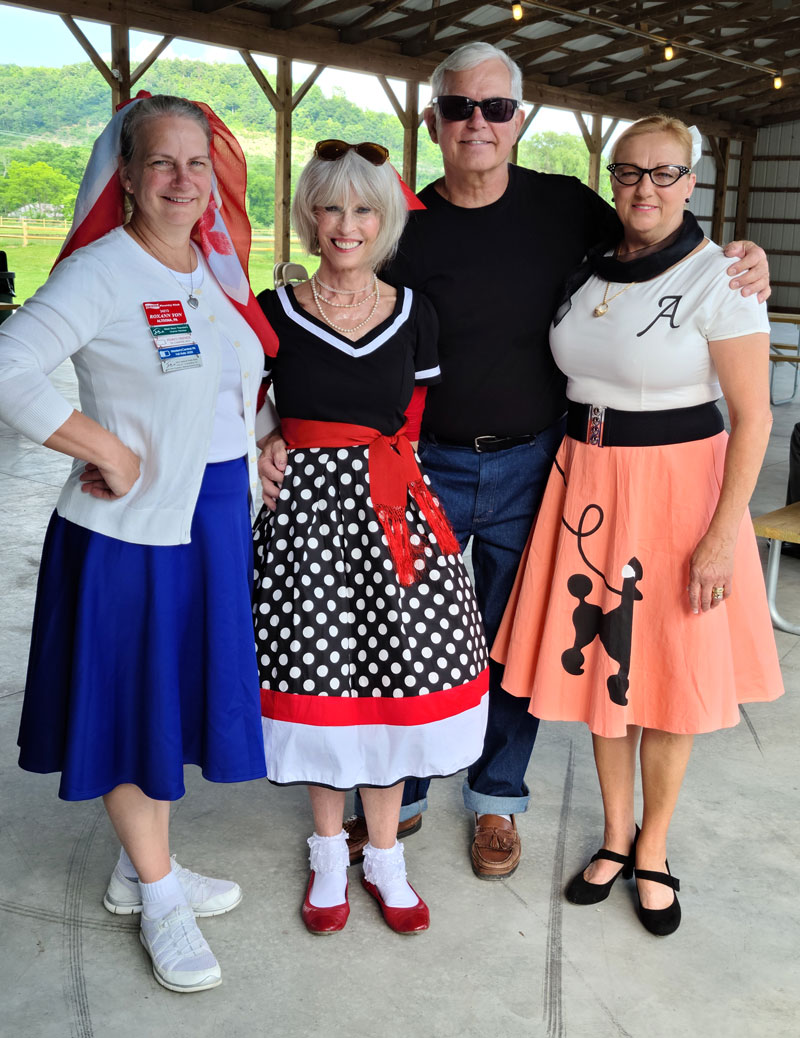 Saturday night was the highlight of the rally as we enjoyed unlimited pizza, sides, snacks, and live music at our premier “SOCK HOP/PIZZA PARTY”. Poodle skirts, bobby socks, and rolled-up jeans set the stage for the evening of twisting, (electric) sliding, slow-dancing, and singing. And on this night we were finally able to have a “real” campfire for making S’mores. What a great way to conclude our first rally.

Looking ahead, most of us are planning to attend the late-June rally by our sister chapter … “Penn’s Friends” … and to attend the Pennsylvania State Rally in Wellsboro (Pennsylvania) in August. West Penn Traveler members attending the International Rally in Lewisburg (West Virginia) the booth collecting new, small, stuffed bears (in gallon zipper bags) to be distributed to local Emergency Services. These bears are used to help service providers calm young patients/victims during emergency situations. Don’t forget to bring these bears to International so we can leave our LOVE behind for children in need.

A huge thank you to Tom & Sallie Watson who served as co-hosts for this rally with the Yons. Their hard work and creativity helped make this a successful start to the summer. The positive reviews and compliments of departing attendees bodes well for the new volunteer hosts planning next June’s rally “in the ‘Burgh” (Pittsburgh). Watch for more details of this exciting event as they become available.

Rox & I are so excited to make many more new friends at future rallies. Until we meet …

Keep your black tanks down, your antennas up, and a fair wind behind your TOAD.