Hello from Vancouver, British Columbia. The Christmas season is coming so I’ll borrow a style from Charles Dickens’ A Christmas Carol and look at the past, the present and what’s yet to come.

The Past: The NKK Region Nine, British Columbia Provincial and the British Columbia Dogwood Klub 25th Anniversary COMBINED RALLY was held in September at Canyon Hot Springs Resort about 30 minutes east of Revelstoke, British Columbia. Considering the Canada/US border was still closed to non-essential travel, we were pleased that we had over a dozen coaches and drive-in visitors who stayed in an on-site cabin. One couple drove out from Manitoba, some came from Alberta, but the majority were from British Columbia. It was especially pleasing to welcome first timers, and I think we put on a pretty good rally as they all left keen for more.

The Present: Hoo-ray the Canada/US border is open both ways for non-essential traffic. That means we can drive our own rigs across, and many have already done so. That, for some, was an early Christmas Present. We wish everyone a Merry Christmas and a Healthy and Happy New Year.

The Future: One hope for the future is that we can all get in our Newmar coaches and put many miles or kilometers behind us as we look for sun, scenic sights, rallies and relaxation.

We are still in the pre-planning stages, but in September we talked about having a rally in Southeastern British Columbia on July 8-10. That would leave five days for driving to the International Rally, perhaps as a group. We should have more details in the next Legacy magazine, but put those dates in your calendar for planning purposes. 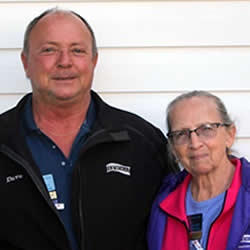