Greeting from Minnesota, Land of 10,000 Lakes. Summer is in full swing and Minnesotans are embracing all there is to do now that lockdowns and restrictions have been lifted.

At our May rally the Loons elected new officers. A big thank you to our new president, Jeanette Shereck, and vice president, Dave Rikke. The chapter very much appreciate your dedication. The loons also want to welcome Gary Hennes and Penny Craig. We are glad to have you with us.

In June the Loons held a rally in far northern Minnesota near Boundary Waters Canoe Area Wilderness. While there we visited the International Wolf Center which strives to advance the survival of wolf populations by teaching about wolves, their relationships to wildlands and the human role in their future. Next we visited the Dorothy Molter Museum. Dorothy was an amazing woman who spent 56 years living on the Isle of Pines on Knife Lake in Minnesota’s Superior National Forest. This area later became known as the Boundary Waters Canoe Area Wilderness. She lived in a rustic cabin with no electricity, telephone or utilities. Her cabin was heated by wood, and she used portable tanks of propane for cooking. In 1952 the Saturday Evening Post published an article titled, “The Loneliest Woman in America”. Dorothy is best remembered for her homemade “Isle of Pines” root beer which she began making in the early 1950’s.  She brewed and bottled thousands of batches annually and kept them cold in her ice house, chilled by ice harvested from the lake in the winter. Visitors to her island were paddlers who had been camping for days and rejoiced in the opportunity to drink something other than iodine flavored lake water. Despite her isolation, Dorothy became one of the most celebrated and well-known residents of the Northwoods and was often referred to as “The Root beer Lady”. Another stop was to the North American Bear Center. They are dedicated to replacing old myths with facts, teaching people about bear behavior, habitat and their relationship with humans.

We are holding our Minnesota State Rally in August. It will be held at the Grand Casino Hinckley RV Resort Thursday, August 26, leaving Monday, August 30th. Activities will include a visit to the Hinckley Fire Museum and a tour of the Snake River Fur Post to learn how the North West Company expanded a global trading system between the upper Mississippi region and Europe. More things to do are being explored as Covid restrictions loosen. 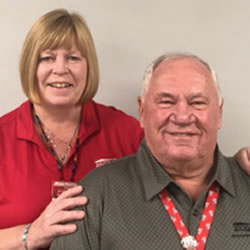