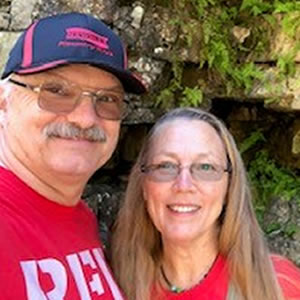 Hey, y’all! We are Carl and Gayle Webber, your “Carolinas” State Directors – and we welcome you. “The Carolinas” includes both North and South Carolina and their associated chapters, the Tarheel Kountry Klub and the Palmetto Pals, respectively. Geographically, the Carolinas combine the best of both worlds; from our home in Marshville, NC, we are about 3-1/2 hours from the majestic mountains and 3-1/2 hours from the shining sea. If it weren’t for the mention of prairies, Irving Berlin’s “God Bless America” could have been written about the Carolinas … “our home sweet home!”

We began our love of RVing and everything Newmar in 2013 when we purchased a Bay Star. The Bay Star served us well on the short getaways we could enjoy while we were both still working. We were both able to retire early, Carl in 2014 from his career in Local Government and Gayle in 2016 from her career with Duke Energy. In 2014, we traded the Bay Star for our current 2012 Dutch Star (“Pegasus”) and have enjoyed our travels and discovering our wonderful country as “most-timers” since then.

We attended our first Newmar Kountry Klub (NKK) International Rally in 2015, at Lewisburg, WV. It was there that we met Philip Melvin and Becky Garner, President and Secretary of the Tarheel Kountry Klub. We attended our first NC/SC Christmas at the Beach Rally in 2016 and were recruited to assume those roles, as Philip and Becky had recently been appointed to the newly created position of Carolinas State Directors. We were elected as President (Carl) and Secretary (Gayle) of the Tarheel Kountry Klub effective January 2017 and have enjoyed every minute of it. In 2020, Philip and Becky retired from their role as Carolinas State Directors, and we are honored to fill that position.

We have attended all NKK International rallies since 2015, all Region rallies since 2016, and all state/local rallies since 2017. We always enjoy volunteering at each of these and encourage members to do likewise. We are both “people persons,” and the camaraderie we have found with the NKK family is remarkable. We invite you to visit the NKK Calendar of Events to find a rally that fits your itinerary, and jump in … both feet first. You’ll be glad you did!

Happy travels, y’all … to wherever your Newmar takes you!