Well, Carole & I are home recovering from a fantastic Peach State Krackers Rally at the Bald Mountain Camping and Resort in Hiawassee Georgia, which just happened to be our 25th Anniversary. We had 27 coaches in attendance and 15 were members of the Peach State Krackers.

Donna Jones & Bill Stanley were the rally hosts and Carole, & I were the co-hosts. Due to circumstances beyond their control, Donna & Bill were not able to attend, so, Carole & I, along with many others, made sure the rally was a success. Donna had a vision and had planned the rally to a tee. That is exactly how it turned out.

Our mornings greeted us with wake-up aroma breakfasts of hot pancakes and crispy bacon or hot biscuits and sausage gravy not to mention steaming coffee and juice of course. Ingles provided our getaway breakfast of delicious cinnamon rolls and muffins.

Our dinners started with our traditional lo-country shrimp boil, which Jim Watson, our Tri-State Director, cooked to perfection, topped off with a Fat Boy ice cream sandwich for dessert.

The “Angry Chicken” delivered a fantastic southern fried chicken dinner which included Peach Cobbler of course, the “Happy Hawg” presented a traditional BBQ dinner with Banana Pudding. Finally, we suffered through another fantastic dinner of beef tips and Chicken Cordon-Blue delivered by “Brother’s at Willow Ranch.” Our dessert was a killer Red Velvet Cake with Vanilla Ice Cream. This rally was a 10 pounder for sure.

National Indoor RV Center’s sponsored our final dinner and Mr. Todd Springs the General Manager of the Lawrenceville, Georgia location, and his wife Adaire, were in attendance to help celebrate this event. 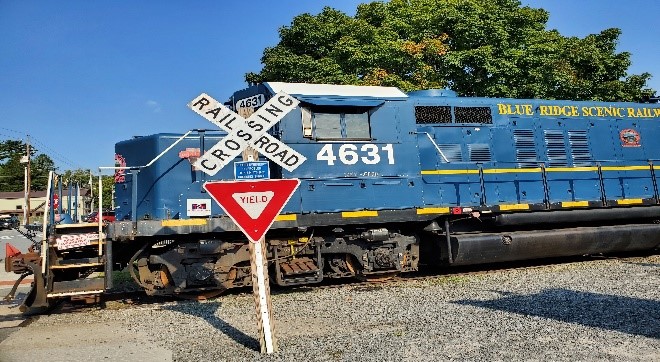 We played card bingo two nights, left-right-center one night and had a relaxing train ride from Blue Ridge, Georgia to McCaysville, Georgia/Copper Hill, Tennessee on the Blue Ridge Scenic Mountain Railroad. We all sure needed that relaxing break. 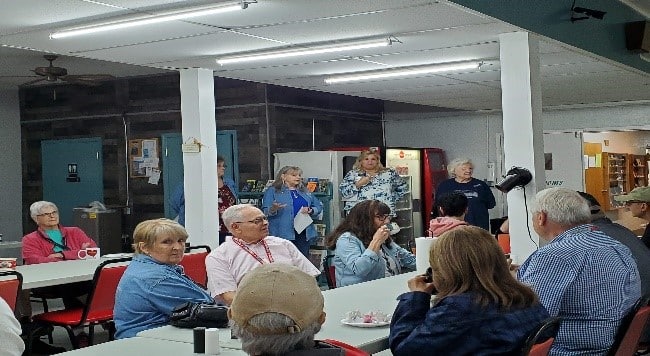 Then we caravanned to the “William Holland Lapidary Arts school in Young Harris, Georgia, for an exciting and informative tour. The staff was very hospitable and welcoming. They were excited at our interest in their crafts and the courses they offer. Everyone enjoyed this tour.

A portion of the rally fee was set aside for a donation to this school. In addition to tuition, they rely on donations since they are a non-profit organization. 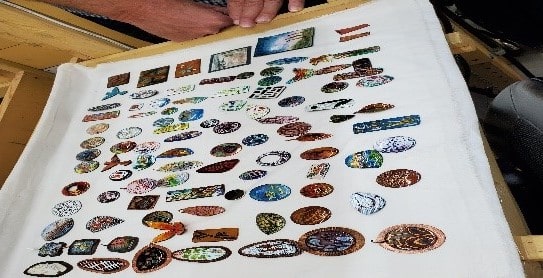 Prior to our entertainment, Gary & Wanda Smith, Region Five Directors, presented a 25-year milestone certificate to the chapter. 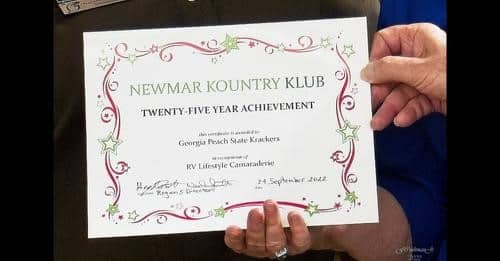 After we were thoroughly stuffed, we had the pleasure of listening to Mr. Tom Edwards perform some good old songs. It was fun. He is a member of the band “Gnarly Fingers” and is an accomplished musician on many different instruments. Tom is a great singer who has performed with many different artists throughout his career. 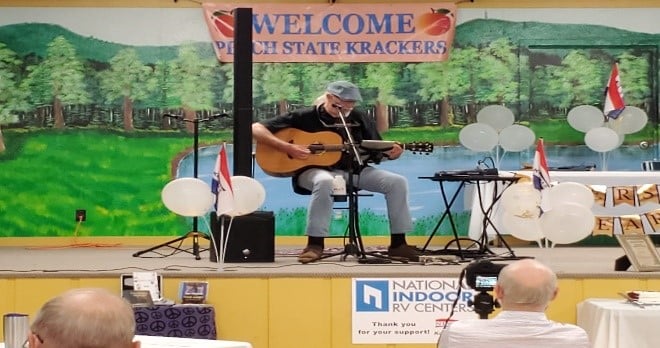 This rally will be remembered for some time and would not have been as successful were it not for the vision and planning of Donna Jones and the help of many volunteers who jumped at the chance to be a part of this event.

Finally, what does it take for an organization to reach such a milestone of 25 years? It will take many members who, over the passing of time will become nameless, and lost to history.

This chapter celebrated 25 years this past week and sadly, we don’t have a knowledge of those very early members. But with the help of a Linda and DeAnn at the NKK office, Roger Weeks, Jim Repp, Gene Richardson, and Gary Smith, we do have a pretty complete officers list from 1997-2022. Technology today gives us the ability to capture all members, in pictures and text. Take the time to record their names for the future. You will be blest by it!

As this is written, next up we will be getting ready to go to Savannah, Georgia and the Region Five Rally at the Creekfire Resort.